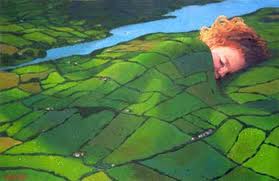 As a native German speaker I’m somewhat foolish to write in English. I studied at a German university where BBC English or British Standard English was taught. After that, I spent almost 20 years in Ireland where my accent stuck out like a sore thumb but where I acquired some its lingo. To complicate matters further, I now live in the US. Just having installed a new PC, I was confronted with the question which nuance of the English to make my default language: BE /AE/ AusE/ Polynesian Island E…. (British English, American English, Australian ...)No IE (Irish English), however! I’m also using Dragon Naturally Speaking –a dictation software- and that poor program is utterly confused by my brogue.
Since I write about my previous life in Ireland, I naturally use an Irish English vocabulary – not Irish-Irish (Gaelic), mind you. Two editors of my books and also fellow writers in a creative writing class advised me to drop those Irish expressions that they didn’t understand: Snogging? A tenner? A piggery?
Who do you write for? Who is your audience? My aim is to tell stories in an Irish landscape and if that includes a modicum of Irish vernacular, doesn’t that paint a more colorful and believable picture?
When my American husband and I first met we had a lot of fun over some differences in both versions of the language. I adopted the words “cart, gas, trash can, realtor” instead of “trolley, petrol, wheelie bin and estate agent.” He learned that I wanted to be picked up when I asked him to collect me at 8 p.m. He will call me when I ask to ring me or give me a bell. He understands that I’m not nibbling at his iPad when I take a tablet.
Now to some Irishisms…
“A cuppa” (a cup of tea) is welcome not only for “elevenses” (second breakfast or coffee break mid-morning) and” a pint of the brown stuff” anytime, really if you like Guinness. “Punters” beware ─ too much of it or you get "plastered" or "langers"! Because of Ireland’s cold and damp climate, you will need a "brollie" and a "wooly jumper", maybe even "wellies" if you work on a farm as I did “myself”. We grew "courgettes" on the farm and raised "bonhams" (piglets); briars abounded in the hedgerows. Most Irish farms have "cocks", nothing indecent but a rooster and also "bullocks". Not to be confused with "bollocks": a swear word that is acceptable in polite society, well almost. Expect some "bollocking, slagging , and having to take the mickey", as the Irish sense of humor is different. (Wikipedia or Urbandictionary will enlighten you if I’ve just lost you). Replacing the vowel “u” with an “e” makes a ubiquitous swear word passable, or simply say “effing” or “frigging.”
“Gurriers” and “knackers” I have to explain in my upcoming book: “I once had a Farm in Ireland.” I don’t want to leave my readers too much in the dark; I need to clarify the meaning of an “AGA” and a “JCB”, too.
Spelling differences are easy: tyre, grey, or jewellery─ the spell checker will pick that up if set to AE as default. 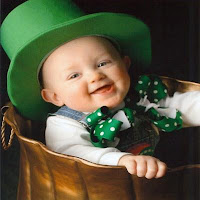 In case you travel to Ireland you should know that the Dail is the parliament, a garda is a policeman, and that the Irish say slánte! when toasting - be that with “poteen” (some moonshine booze) or any other drink.
So now for you! Are you with me now? There you have it in a nutshell! Before you get too bored and are “away with the fairies”, let me leave it at this and say slán! Good-bye!

Posted by Siggy Buckley at 11:15 AM No comments: