Not so Goodies in our Food

In Europe, scientists found out in the 70s that food additives, artificial colorings in particular, are detrimental to children's development. This plus other additional goodies that turn up in our food scared us: pesticides, herbicides, antibiotics, growth promoters; and then there are the preservatives. It also made us think and come to the conclusion that we wanted to produce our own food  and not digest industrial foods anymore that can make you sick.

The soil was polluted, lakes and rivers were, air pollution grew and lead to the big phenomenon of "trees dying" due to acid rain. How could anything healthy grow out of this. Discovering that all these "goodies" were enhancing or rather compromising our food--our stomachs turned and made us think. We decided to grow our own and become self-sufficient. First in the constraints of our house in the the city; well, rather the house of my mother-in-law. After a while, however, she didn't like her shrubs to be replaced any more with strawberries and Brussels sprouts. She wanted her evergreen ground cover back. We had too find our own place; a cottage in the country. A few years later, even that wasn't far away enough to get away from pollution: Chernobyl happened. Taking all of this into account, we opted for a healthier life-style and chose to go to Ireland to make this dream come true.

Now, in Europe and Germany in particular with its stringent environmental laws, food additives have either been  banned or have to be declared on the individual product. "To regulate these additives, and inform consumers, each additive is assigned a unique number, termed as "E numbers", which is used in Europe for all approved additives. Within the EU E numbers are all prefixed by E ". See the full list of what is regulated as a food additive.

In the US, the FDA claims that food dyes are safe, but the experience of some parents and the results of some studies tell a different story. A 2006 study published in the Toxicological Sciences journal showed that exposure to certain dyes during the first few years of life could cause behavioral and developmental disorders in children.

Other countries have already banned or require warning labels for artificially dyed foods. For example, Kellogg’s cereal bars are made using Red 40, Yellow 6 and Blue 1 in the United States, but contain no artificial dyes in the UK. Instead, the same bars are produced there using beetroot, paprika and annatto extract to provide color.

"The problem was first identified in the 1970s. Europe controls and even bans them in foods. The FDA is finally getting around to wondering if they're might be a problem." ADHD comes to mind.

http://www.therealfoodchannel.com/page/20470.html  3min 35 if you want to take the time.
Thanks to Brasscheck that provides invaluable info on many topics.

Posted by Siggy Buckley at 3:36 PM No comments:

Have my green cap on again.

Since I'm about to finish my book on my Irish adventure, I'm wearing my Ex Farmer'sWife's hat more often again as you may have notice. I need a cover artist and some rally cute drawing because the pictures I had in my coffee table version of my book"I once had farm in Ireland" don't translate well into a paperback.
It's been too long and this blog was on the back burner for some time while I've been busy promoting my novel Next time lucky. This will be remedied now and I will give an advance notice soon when it's coming out. 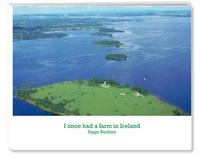 Also appreciate your recommendations on different publishers like Lightning Source of Iunivers. Anybody used them and has some experience to share? I will create  a FB page for the Ex Farmer's Wife.
In the meantime let me recommend my latest find, anew pp that makes life easier for every blogger and more interesting for your readers.It's called glossy, put together in minutes and here's my link to give you an idea how it looks:
http://www.glos.si/siggys-omnibus . I had set up something similar over the few months to give an overview of my various websites. Took e forever. Admittedly, it looks better in y views, but glossy is a quick news round up of all your social networking activities. You tell me. More soon
The Ex Farmer's wife
Posted by Siggy Buckley at 3:09 PM No comments: