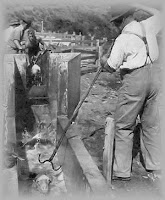 Sheep require a bit more attention and "Personal hygiene" beyond the shearing I described in my last post. In order to avoid external parasites such as itch mite, blow-fly, ticks and scab that can easily kill a sheep, the farmer has to dip them in some preventive medicine. There are two broad classes of sheep dip: organophosphorus compounds, from which chemical warfare agents were later developed, and synthetic pyrethroids. If you read a British veterinary law issued by HSE (Health& Safety Executive) you understand the degree if toxicity and harmfulness involved, both to humans and animals: "Everyone who will be involved in the dipping operation must be properly trained and competent. This is just as important whether you use an organophosphorous (OP) sheep dip of a synthetic pyrethroid (SP) sheep dip.
Under the Veterinary Medicines Regulations 2006 it is an offense to use sheep dip unless this is done by, or under the supervision and in the presence of, a person who holds a Certificate of Competence in the Safe Use of Sheep Dips."
So that was out for us organic farmers!
An organic farmer has to use his husbandry skills to control pests: free range conditions, keep stocking rates low,rotate grazing sites. These measures also help decrease the need of deworming--another labor-some procedure. More care and inspection of the individual animal is required by the organic sheep farmer, e.g. by maintaining a closed flock (no bought-in stock) which also help prevent disease. In other words:Organic farming again is more labor intensive.
Posted by The Ex Farmer's Wife at 10:37 AM No comments:

In late spring and early summer it's high time to get your sheep shorn.I'm afraid this year I left it almost too late! But then again, Klkenny still had a touch of snow last week; in June!
At first, the sheep don't seem to be too hot or look like they need a haircut but with the arrival of flies the thick winter fleece becomes a danger to the animals. Maggots easily infest a flock of sheep and that's trouble no farmer wants to deal with. We had a neighbor who offered his services. Mick always did his own and had experience. Shearing was done outside on the yard. The sheep have to be rounded up by an able dog first. Our Brandy had talent for this job. She clearly enjoyed nipping the sheep in their legs too while rounding them up and circling them all the time to keep them in check. Where she had learned it--we didn't know. It was in her blood, whereas later off spring of hers was useless.
The shearer holds a sheep between his legs while a second is needed to keep the struggling sheep still. Mostly they are not very cooperative in spite of the sense of relief afterwards.Zip, zip, zip and off flies the wool. To get the fleece in one piece is impossible. They must come from slaughtered sheep. In the olden days it was worth to collect the wool but at that time we were in the "business", prices were too low to bother. We still had to pick up the wool and stuff them into bags because the dogs would make a right mess and have way too much fun with it. Fertilizer bags are the bags of choice like for many other jobs, collecting windfall apples, even for sleighing down a hill which merely has a sprinkle of snow.
It's a smelly job. Sheep have a certain odor, their lanolin imbued wool does too and so do the men at work after a while. On a hot day, it can be quite overwhelming for the delicate nose of a city girl. After a while and typical hints from the shearers, drink is fetched. This type of work makes you hungry as well.
In the following years, when we had about 100 sheep we needed professional help if this social outing wasn't going to take all week.
I always felt sorry for the sheep afterwards when the weather was still on the chilly side. They looked like starved skeletons, naked and unappealing. But they usually frolicked shortly after the ordeal. After that they should receive a dip in a medicine infused bath to prevent the dreaded parasites. Which is an ordeal in itself.
Posted by The Ex Farmer's Wife at 1:27 PM 1 comment:

I hope there were some responses to the request for help on this Clare smallholding! I'd love to hear about it.
Sorry for neglecting this blog for almost 3 weeks. I've been busy promoting my novel:Next Time Lucky. It is available on Amazon. both as a paperback now and an eBook. I wish I could publish my memories of our Irish farming life in a similar fashion. So far I made it into a coffee table book which is too expensive to produce and sell. $35 plus shipping $ 9.99 from the publisher. Even though there is a big interest in having it done. The idea behind it really was to keep the memory alive for my children.

If anybody has connections to a producer of coffee table books, I'd appreciate if you could let me know. Until then it remains a blog and gets put into print for family and special friends. I will continue this blog with a story about our bonhams (pronounced bonnefs =Irish for piglets). A charming vignette and of big importance, especially to my son, Patrick.
In the meantime, here in Florida the summer heat progresses. Unimaginable steam-room conditions that people in Ireland can only imagine in their wildest dreams.
Posted by The Ex Farmer's Wife at 10:34 AM No comments: